On-line Forum is a collection of the articles and comments over the last year that I have tracked related to this project. If you have anything to add feel free to click ‘reply’ at the bottom of the page.

I would like to begin this forum with a note on my intention for this project. I began Messages To: in Edmonton during the spring of 2011. Here I became aware of the erasure of visual renderings: chalk messages written by one and daily washed away by another. Nagged by these marks created to communicate messages of love, support and anecdotes, I began to spend more time with the messages, questions came to my mind such as:
Is this a new or archaic system of communication?
How has this act of writing filled a void within this community?
Is this a contemporary form of publishing?
Literature and/or Art? 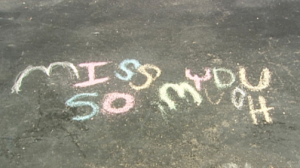 A local artist is preserving an endangered form of communication – chalk messages written to inmates on the sidewalk outside the Edmonton Remand centre. Lindsey Bond listed some of the chalked messages: “‘I miss you. I love you, Randy. I dropped off the mail, love Sheila and girls.” “It’s these very simple common everyday phrases,” she said. Bond first noticed the images while walking by the Remand Centre last spring. She realized that they were written so that inmates could see them from the windows. Bond started to document them, taking photos of the sidewalk before remand workers could wash the chalk away every morning. “Visually these messages get walked over everyday. They’re ignored.” Those photos make up a photo exhibit called “Messages To: The Edmonton Remand Centre Newspaper.” It is on display at Latitude 53 Gallery as well as transit centres around the city.

Bond says with the centre moving to north Edmonton, inmates will be even more isolated than they are now. (CBC) The art exhibit opened Saturday with a public forum at the Remand Centre to discuss its future. The province is building a new, larger remand centre in north Edmonton to replace the existing building. Bond says that change could mean the end of the chalk messages, which will leave inmates one less way to communicate with people on the outside. “All of the court sessions and stuff will be done through video conferencing. It’s very isolated, there’s gonna be a lot of fencing. And then also just actual location and people being able to travel out there, there’s not a lot of bus transportation,” she said. “There’s going to be a lot of isolation happening.”
“Messages To: The Edmonton Remand Centre Newspaper” is on display until June 23 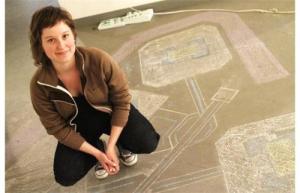 A citywide art installation is releasing chalk messages written to prisoners into the wider world. Winnipeg’s Lindsey Bond is drawing attention to the upcoming relocation of the Edmonton Remand Centre to our extreme outskirts, and what effect that will have on a unique channel of sidewalk communication found for decades in the city’s core, visible from inside the transitory prison. Bond’s project includes medium-format photos of messages reproduced in LRT ad spaces, giant chalk prison maps on a gallery floor and even a book of her soft and carefully taken images. The Edmonton-born artist was living here in 2011 when she first noticed the daily messages of love, longing and hope. “Spring had arrived and I was doing a lot of cycling around the city,” she explains in an interview at Latitude 53. “I was biking along the path by the Remand Centre and was really taken by these messages. I kept coming back and reading them. ‘This is an amazing thing,’ I thought. ‘This needs to be documented.’ ”

The result, with an official opening Saturday in Latitude 53’s ProJex Room, is called Messages To: The Edmonton Remand Centre Newspaper – the “newspaper” being the messages cleaned off daily by Remand Centre staff. For three months, Bond, toting her Swedish Hasselblad camera, became familiar with the community drawn to the incarcerated. “That community is very flighty, very temporal,” she explains. “You get someone writing one day and maybe never see them again. I ended up running into different people almost every day. “There’s a woman – I’m not going to use names – she was pregnant, had the baby, and her boyfriend was in. She’d go in there and talk to him every day, they had to talk on the phone. They’re not married and they’re not blood, so she couldn’t actually see him. And she also has a past, so they didn’t want them interacting.” As much as we might be drawn to the romance of the colourful notes, Bond is also keenly aware of the sharp politics of the situation. People behind bars are often there for a legitimate reason. The 27-year-old, who trained at the Alberta College of Art and Design and Emily Carr University, says: “When I was starting the project and getting more acquainted with the community, there was a point I had to step back and say, ‘Whoa, this is a big can of worms. There’s a lot going on here, and a lot of it’s not good.’ You can’t just sugarcoat and romanticize the situation. There are illegal, really terrible things. But I wanted to keep going with the project to start a dialogue about that community, first and foremost.”

The artist brings up the recently passed Bill C-10, which will result in longer prison sentences, for which the provinces are financially on the hook. “These large prisons are being built, but nothing’s really being done about the core of the problem. Maybe I can’t deal with or address those larger issues – killing and raping and murdering. This was a bit of a challenge.” At almost 60,000 square metres, the $568.6-million Remand Centre is the largest public building project ever undertaken by the province, and will be the largest correctional institution in the country. Its 1,952 beds are expected to grow to 2,816 with the addition of three more living pods. The massive centre at 18415 127th St. is slated to open early next year. “With the current Remand Centre, at least there’s people coming by it. It’s part of the visual culture. It’s part of the community. You know it’s there, you know there are people inside, whether or not you want to associate with that. Now it’s being pushed to the border of the city.” In her process, the artist was touched by the stories she found. “There’s this one message, ‘Dropping off mail. Sheila and the kids’ or something – this simple message you wouldn’t think twice about, but to write that in the street and publish it in that way.  “There was this one gentleman who was writing things like, ‘You drive me crazy and I miss you so much.’ The way he was writing them, he was jumping all over the sidewalk – feeling all these things and trying to get them out. This was his way. He knows she’s in there watching. That’s what most affected me – trying to communicate despite these hard circumstances.” Besides the images found in the LRT stations, Bond’s chalk map of the two Remand Centres, which will be seen at Latitude 53, will act as a metaphor for displacement. It’s intended to be walked on and destroyed. “People walk over the chalk messages and they don’t care, so I’m just going to let it be, and maybe it’ll make them think the next time they walk over someone’s chalk message.”
The project starts Saturday with a public forum at 2 p.m. at the Remand Centre courtyard, 9660 104th Ave. fgriwkowsky@fisheyefoto

One thought on “Online Forum”